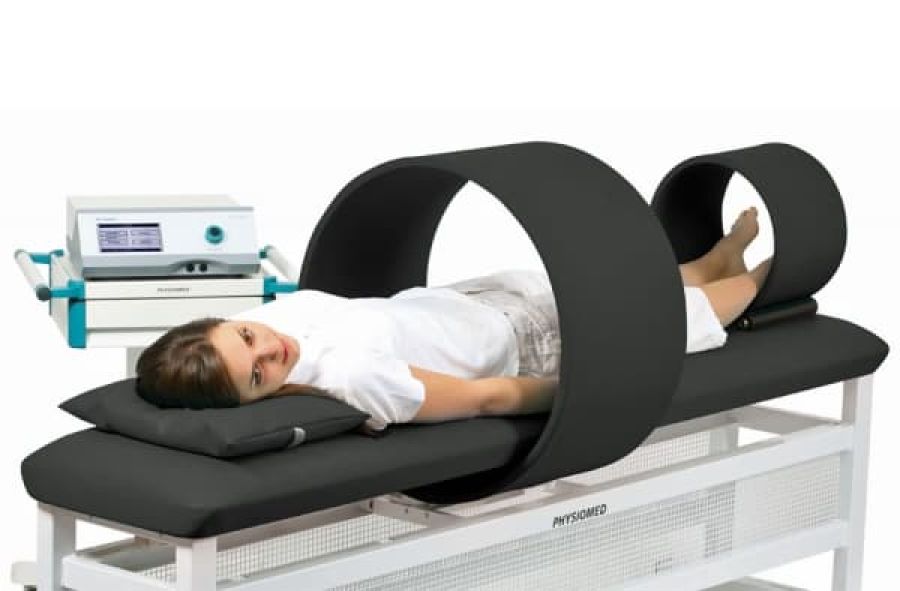 Magnet therapy involves applying the weak magnetic field of permanent magnets to the body, for purported health benefits. Different effects are assigned to different orientations of the magnet.

Products include magnetic bracelets and jewelry; magnetic straps for wrists, ankles, knees, and back; shoe insoles; mattresses; magnetic blankets (blankets with magnets woven into the material); magnetic creams; magnetic supplements; plasters/patches and water that has been "magnetized". Application is usually performed by the patient.

It is similar to the alternative medicine practice of electromagnetic therapy, which uses the weak electric or magnetic fields as well, but generated by electrically powered devices.

Perhaps the most common suggested mechanism is that magnets might improve blood flow in underlying tissues. The field surrounding magnet therapy devices is far too weak and falls off with distance far too quickly to appreciably affect hemoglobin, other blood components, muscle tissue, bones, blood vessels, or organs. A 1991 study on humans of static field strengths up to 1 T found no effect on local blood flow. Tissue oxygenation is similarly unaffected. Some practitioners claim that the magnets can restore the body's hypothetical "electromagnetic energy balance", but no such balance is medically recognized. Even in the magnetic fields used in magnetic resonance imaging, which are many times stronger, none of the claimed effects are observed. If the body were meaningfully affected by the weak magnets used in magnet therapy, MRI would be impractical.

Several studies have been conducted in recent years to investigate what role, if any, static magnetic fields may play in health and healing. Unbiased studies of magnetic therapy are problematic, since magnetisation can be easily detected, for instance, by the attraction forces on ferrous (iron-containing) objects; because of this, effective blinding of studies (where neither patients nor assessors know who is receiving treatment versus placebo) is difficult. Incomplete or insufficient blinding tends to exaggerate treatment effects, particularly where any such effects are small. Health claims regarding longevity and cancer treatment are implausible and unsupported by any research. More mundane health claims, most commonly about anecdotal pain relief, also lack any credible proposed mechanism and clinical research is not promising.

The American Cancer Society states that "available scientific evidence does not support these claims". According to the National Center for Complementary and Integrative Health, studies of magnetic jewelry haven't shown demonstrable effects on pain, nerve function, cell growth or blood flow.

A 2008 systematic review of magnet therapy for all indications found insufficient evidence to determine whether magnet therapy is effective for pain relief, as did a 2012 review focused on osteoarthritis. Both reviews reported that small sample sizes, inadequate randomization, and difficulty with allocation concealment all tend to bias studies positively and limit the strength of any conclusions.

These devices are generally considered safe in themselves, though there can be significant financial and opportunity costs to magnet therapy, especially when treatment or diagnosis are avoided or delayed.