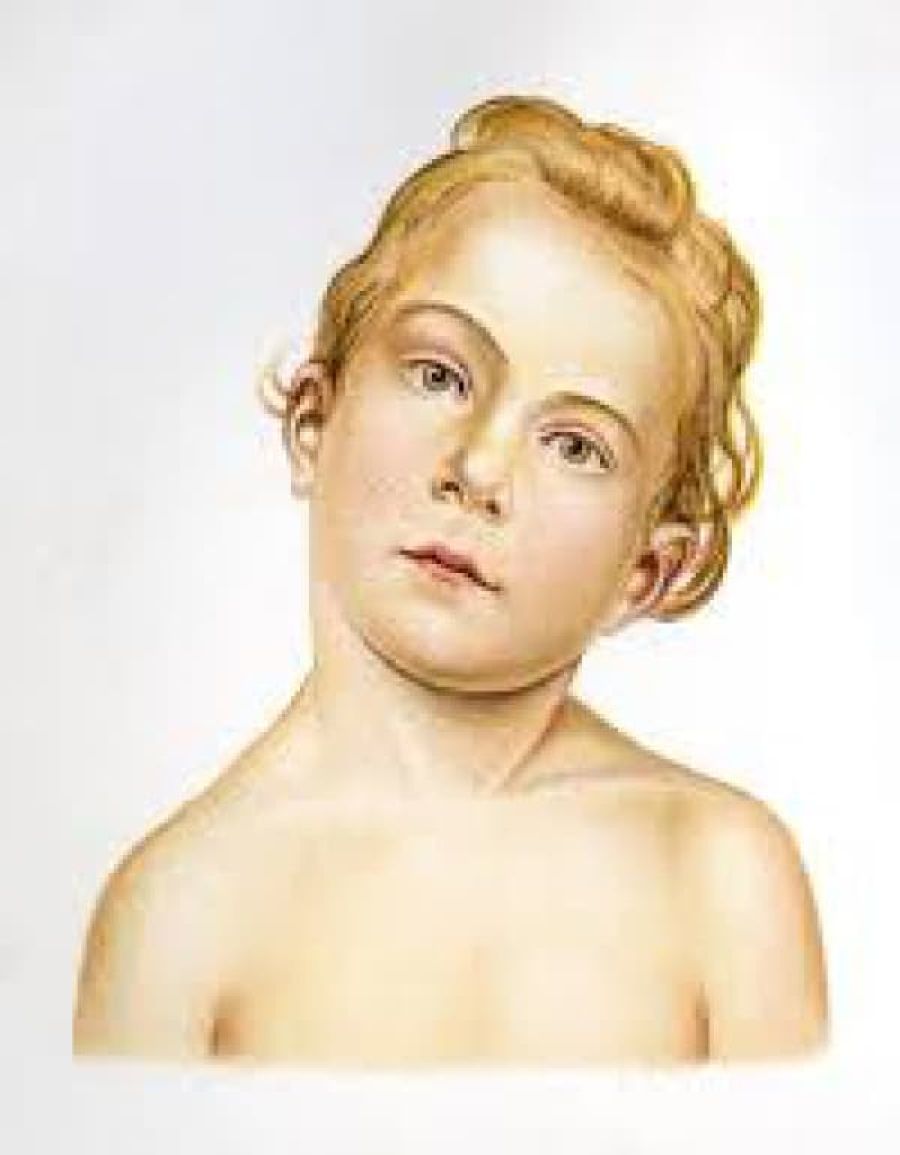 The sternocleidomastoid muscle has a sternal and clavicular head. The sternal head is directed from the manubrium sterni superiorly, laterally and posteriorly and the clavicular from the medial third of the clavicle vertically upward. It runs to the mastoid process. It enables an ipsilateral lateral flexion and a contralateral rotation. The muscle extends the upper part of the cervical spine and flexes the lower part.

CMT occurs in 0.4 to 3.94% of births according to different sources. It is the third most common musculoskeletal abnormality in infants.

The true etiology remains controversial. So far more than 80 entities have been described that can cause torticollis. We can differentiate several frequent causes:

A common hypothesis of muscular torticollis is that intrauterine constraint limits head mobility and leads to progressive degrees of neck contracture. The severity depends on the duration of prenatal immobility. There is no difference in clinical severity based on the method of childbirth.

CMT is characterized by a unilateral contraction of the sternocleidomastoid muscle that forces the infant to hold the head tilted toward the affected side with slight rotation of the chin to the contralateral side.The affected side seems to be excessively stronger than the contralateral side. This causes an imbalance in the neck muscles. In some cases the shoulder is elevated on the affected side. It can be accompanied by plagiocephaly, or develop as a result of plagiocephaly.

When CMT is left untreated, it can cause fibrosis of the cervical musculature with progressive limitation of head movement, craniofacial asymmetry, and compensatory scoliosis that worsens with age.
CMT may be categorised into 3 types:

Infants presenting with observable neck/ head/ facial asymmetry should be screened for CMT. In cases of CMT, the sternocleidomastoid muscle may be shortened on the involved side, leading to an ipsilateral tilt of the head and a contralateral rotation of the face and chin. Reduced neck ROM, a palpable sternocleidomastoid mass, a head position preference and/or plagiocephaly may be present.

Torticollis is a sign of an underlying disease process. It does not imply a specific diagnosis.

Manual stretching is the most common form of treatment for congenital muscular torticollis. A good stabilization and correct hand positions are necessary for the success of the stretch. However, every child/parent pair will have other preferences of stretching methods or positions.

An example of a stretching technique: Following stretch requires two persons. Person one stabilizes the shoulders. The other person does the stretching. For a torticollis on the right side, the left side of the face is cupped. The skull is supported with the right hand under the occipital. The left hand is placed on the chin. This hand placement is both for right rotation and left lateral flexion. Slight traction is given and then a right rotation is performed over the available ROM. The stretch is held for 10 seconds. The lateral flexion stretch is also initiated with a slight traction, followed by slight forward flexion and 10° of right rotation. Then the head is moved laterally, so that the left ear approached the left shoulder.
Another stretching technique can be really effective, this technique is using the gravity to assist in the passive stretch for the affected muscle. start the technique by carrying the baby where he/she is facing away from you. (For example if the child has left torticollis) carry the child with his/her head placed on your left shoulder and then place your right arm between his/her legs and reach his/her left shoulder, then gently depress their left shoulder (push it downward), and with your left hand gently lift his/her head up till the right ear is contacted with the right shoulder (or as higher as the baby can tolerate) then hold from 20 seconds up to one minute (the time could be increased according to the cooperation level of the baby). Advice the parents to play with their baby and distracting him/her from the pain.

Conservative management also includes educating the parents/caregivers about positioning and handling skills that promote active neck rotation toward the affected side and discouraging children from tilting their head toward the affected side.
Kinesio Taping is a possible addition to the physical therapy management. Powell (2010) concluded from three case studies that kinesio taping might decrease treatment duration due to longer lasting efficacy with Kinesio application. Öhman (2012) concluded kinesio-taping had an immediate effect on muscular imbalance in children with congenital torticollis.
Kinesio Taping of Sternocleidomastoid muscle: on the affected side from insertion to origin with 5-10% tension, on the unaffected side from origin to insertion with 10-15% tension.
Mean treatment duration and predictive factors were studied by C. Emery (1994). The mean treatment of children with congenital muscular torticollis was 4.7 months. Children with palpable masses in the sternocleidomastoid muscle are generally younger and have more severe restrictions in ROM. They were treated longer (6.9 months) than children with no palpable mass (3.9 months).
Children received a tubular orthosis for torticollis (TOT) when at the 4.5 months of age or older there was a head tilt of more than 6°. The TOT was essentially a collar made of soft tubing, which the child wore while awake as an active correcting device. Their treatment time was longer (7.2 months) than the time needed in children who didn’t need the orthosis (3.6 months).
The severity of restriction of neck rotation was seen as a significant predictor in children with no palpable intramuscular fibrotic sternocleidomastoid muscle mass.

Age at initial assessment, side of involvement and gender were no significant predictors of treatment duration.

Most of the children under one year of age can be treated conservatively.

If conservative treatment is not successful botox or surgical options may be considered. These include subcutaneous tenotomy, open tenotomy, bipolar tenotomy, and radical resection of a sternomastoid tumour or the sternocleidomastoid muscle.
Traditionally, the operative treatment of congenital muscular torticollis has been largely determined by the age of the patient. Although some authors have suggested that operations should be performed within a few weeks of birth, later reports have shown spontaneous resolution of symptoms within a year of birth, or there were satisfactory results with conservative treatment, such as bracing, exercise and massage.
An operation performed too early, particularly before one year of age creates problems in post-operative wound management owing to easier formation of haematomas and increased prevalence of infection. Therefore, some authors have reported that the optimal time for operation is between one and four years of age. Coventry and Harris reported that operation up to 12 years of age produced good results.
Latest studies suggest that age is not the most important factor when determining the optimal time for operation, and that compliance with a post-operative rehabilitation program is the most important consideration. They suggest that operative treatment of congenital muscular torticollis should be delayed until such compliance is possible.