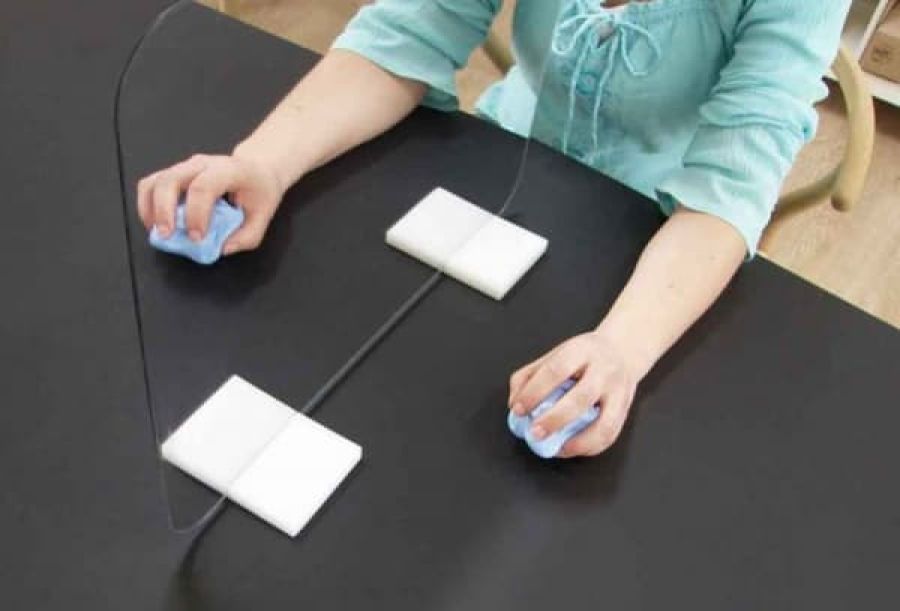 Mirror therapy was invented by Vilayanur S. Ramachandran to help alleviate Phantom limb pain, in which patients feel they still have a pain in the limb even after having it amputated.

Ramachandran and Rogers-Ramachandran first devised the technique in an attempt to help those with phantom limb pain resolve what they termed a ‘learned paralysis’ of the painful phantom limb. The visual feedback, from viewing the reflection of the intact limb in place of the phantom limb, made it possible for the patient to perceive movement in the phantom limb. Their hypothesis was that every time the patient attempted to move the paralyzed limb, they received sensory feedback (through vision and Proprioception) that the limb did not move. This feedback stamped itself into the brain circuitry through a process of Hebbian learning, so that, even when the limb was no longer present, the brain had learned that the limb (and subsequent phantom) was paralyzed. To retrain the brain, and thereby eliminate the learned paralysis, Ramachandran and Rogers-Ramachandran created the mirror box.

The patient places the good limb into one side, and the stump into the other. The patient then looks into the mirror on the side with good limb and makes "mirror symmetric" movements, as a symphony conductor might, or as we do when we clap our hands. Because the subject is seeing the reflected image of the good hand moving, it appears as if the phantom limb is also moving. Through the use of this artificial visual feedback, it becomes possible for the patient to "move" the phantom limb, and to unclench it from potentially painful positions.

This approach exploits the brain’s preference to prioritise visual feedback over somatosensory/proprioceptive feedback concerning limb position. In conditions such as phantom limb pain (PLP), stroke, or Chronic Regional Pain Syndrome Type 1 (CRPS1) where neuropathic processes cause issues with pain, related or unrelated to movement, this approach is thought to offer potential relief.

MT has been shown to increase cortical and spinal motor excitability, possibly through the effect on the 'mirror neuron system. Mirror Neurons accounts for about 20% of all the neurons present in the human brain. These mirror neurons are responsible for laterality reconstruction i.e., ability to differentiate between the left and the right side. When using the Mirror box, these mirror neurons get activated and helps in the recovery of affected parts. This system is thought to use the observation of movement to stimulate the motor processes which would be involved in that movement. Similarities have been drawn with motor imagery whereby the individual will mentally imagine movements rather than observing the reflection of a movement in a mirror. It is thought that the brain's natural inclination to prioritise visual feedback over all others would make MT a more powerful tool, however, research evidence is currently lacking in support of this hypothesis. It is to be noted that the major difference in the neuronal reorganisation while using a mirror box is that the ipsilateral hemisphere's neurons give connection to the same side affected limbs rather than the conventional therapies which target the neuronal reorganization of the contralateral hemisphere.

Most of the evidence since the early work has come from case studies and anecdotal data.

Chan et al (2007) allocated 22 patients with Phantom Limb Pain (PLP) into a mirror therapy group, mental imagery group and a covered mirror group (control) . They reported that all patients in the mirror therapy group experienced reduced PLP. This was not the case in the other two groups. The study did not control potential biases and its methodology was not described in detail, so weakening the power of its findings.
A more robust trial investigated two groups of subjects suffering from PLP. A mirror group were compared to a covered mirror group, however, there were no statistically significant reductions in PLP between groups.
In 2011 a large scale review of the literature on mirror therapy by Rothgangel summarized the current research as follows: "For stroke, there is a moderate quality of evidence that MT as an additional intervention improves recovery of arm function and a low quality of evidence regarding lower limb function and pain after stroke. The quality of evidence in patients with complex regional pain syndrome and phantom limb pain is also low. Firm conclusions could not be drawn. Little is known about which patients are likely to benefit most from MT, and how MT should preferably be applied. Future studies with clear descriptions of intervention protocols should focus on standardised outcome measures and systematically register adverse effects".
A further review of current approaches in the treatment of PLP concluded that the benefits of mirror therapy appear to be limited to patients who suffer from cramping and muscular-type phantom pain. They noted that despite the findings of one RCT, there was no systematic evidence to support the use of this modality and even some suggestion it could be counterproductive. However, this may be due to study design, choice and size of sample and application of the modality.
Diers et al (2010)noted that applying MT as part of a sequence of modalities appeared to produce positive results against applying it in isolation. In an RCT, patients with CRPS1 and PLP showed decreases in pain, and improved function both immediately post-treatment and at a 6-month follow-up when using mirror training as part of a sequence of modalities known as Graded Motor Imagery (GMI). Mirrored imagery alone did not, however, activate cortical processes in patients with phantom limb pain. The authors concluded that further research was required to establish the cortical processes underlying MT and motor imagery in order to guide the optimal method of application for these modalities.
These findings appeared to support earlier suggestions that whilst mirrored movements may expose the cortex to sensory and motor input, the therapeutic effect is magnified if cortical networks were gradually activated using limb recognition, motor imagery and finally mirrored movement. This sequence of modalities became known as GMI. Using a single blind randomised control design this approach was investigated with patients suffering from PLP, CRPS and brachial plexus avulsion. Whilst the heterogeneity of the sample was acknowledged, it was argued that cortical similarities exist between these conditions causing cortical neglect of the affected limb leading to changes in cortical mapping. The sample size in each study was small, but both studies showed significant reductions in pain and cortical reorganisation following a six-week program.

Working with patients with different complex regional pain syndromes can be challenging. Pharmacological therapies are often associated with a variety of side effects. Mind-body modalities are thought to play a role; however, the lack of clear consensus and a large body of clinical experience makes it hard to provide good evidence-based recommendation to most of our chronic pain patients. Current evidence supports the use of Mirror Box Therapy.