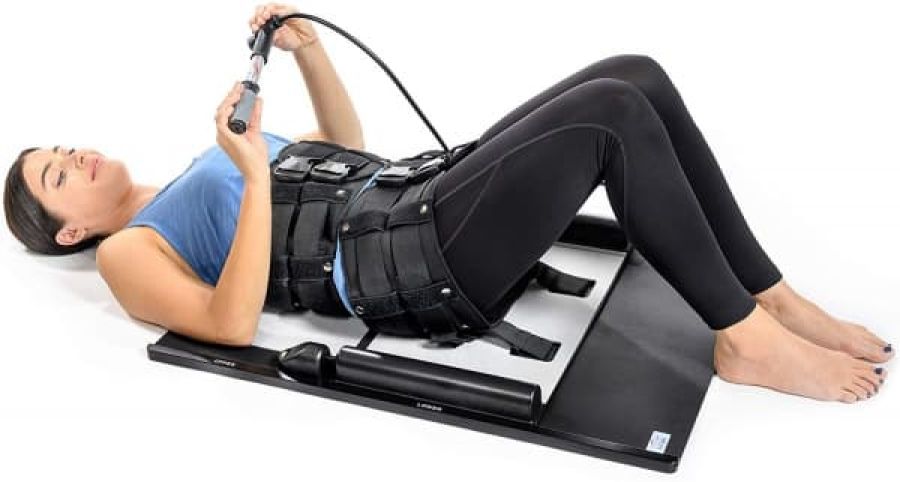 The lumbar spine is made up of five individual vertebrae which are numbered L1 to L5 and together they create the concave lumbar curvature in the lower back. Found along the body’s midline in the lumbar (lower back) region, the lumbar vertebrae make up the region of the spine inferior to the thoracic vertebrae in the thorax and superior to the sacrum and coccyx in the pelvis.These vertebrae carry all of the upper body’s weight while providing flexibility and movement to the trunk region. They also protect the delicate spinal cord and nerves within their vertebral canal.
Connecting each vertebra to its neighbouring vertebra is an intervertebral disk made of tough fibrocartilage with a jelly-like centre. The outer layer of the intervertebral disk, the annulus fibrosis, holds the vertebrae together and provides strength and flexibility to the back during movement. The jelly-like nucleus pulposus acts as a shock absorber to resist the strain and pressure exerted on the lower back.
The lumbar vertebrae are the some of the largest and heaviest vertebrae in the spine, second in size only to the sacrum. A cylinder of bone known as the vertebral body makes up the majority of the lumbar vertebrae’s mass and bears most of the body’s weight. Posteriorly the body is connected to a thin ring of bone known as the arch. The arch surrounds the hollow vertebral foramen and connects the body to the bony processes on the posterior of the vertebra. The vertebral foramen is a large, triangular opening in the centre of the vertebra that provides space for the spinal cord, cauda equina, and meninges as they pass through the lower back.
Extending from the vertebral arch are several bony processes that are involved in muscle attachment and movement of the lower back. The spinous process extends from the posterior end of the arch as a thin rectangle of bone. It serves as a connection point for the muscles of the back and pelvis, such as the psoas major and interspinales. On the left and right lateral sides of each vertebra are the short, triangular transverse processes. The transverse processes form important connection points for many muscles, including the rotatores and multifidus muscles that extend and rotate the trunk.
Unlike the cervical vertebrae in the neck, the lumbar vertebrae lack the transverse foramina in the transverse processes, and also lack facets to either side of the body. The fifth lumbar vertebra is distinct from the L1-4 vertebrae in being much larger on its front side than in the back. Its spinous process, on the other hand, is smaller than in the other lumbar vertebrae with a wide, four-sided shape that comes to a rough edge and a thick notch.

Several types of lumbar traction are described in literature but the most used include:

Several theories have been proposed to explain the possible clinical benefit of traction therapy. Distracting the motion segment is thought to change the position of the nucleus pulposus relative to the posterior annulus fibrosus or change the disc-nerve interface. These effects are plausible based on studies examining the kinematics of the lumbar spine during traction therapies. In addition to separating the vertebrae, traction has been shown to reduce nucleus pulposus pressure and increase foraminal area. However, it is unlikely that mechanical changes observed in a prone position will be sustained after a patient resumes an upright, weight bearing posture. Any lasting clinical response to traction therapy would more likely be because of the effect of traction on the mechanobiology of the motion segment or neural tissues. Complicating the issue further is that not all traction therapies exert the same force on the spine and animal studies have found the mechanobiology of the disc to be sensitive to the amount, frequency, and duration of loading.
It is possible that some forms of traction stimulate disc or joint repair whereas others promote tissue degradation . Although these variables have not been systematically examined, even in animal models, what is known regarding disc mechanobiology should alert us to the possibility that not all traction therapies are equal. If distracting the spine can influence disc and joint mechanobiology, different modes of traction may result in different clinical results. Systematic reviews of lumbar traction therapy have typically not considered that different effects may exist based on force and time parameters . Traction trials have most often included patients with a mix of clinical presentations including back-dominant low back pain (LBP), leg-dominant LBP, or both. However, a patient with only dominant LBP and no radiculopathy is likely experiencing pain from a sclerotomal source, such as facet joints or disc, whereas sciatic pain, even if caused by disc herniation, may be predominately of neural origin. Although it is reasonable to suspect that traction therapies may affect these conditions differently, there is insufficient evidence to support this hypothesis.
Distraction-manipulation and positional distraction are mechanically different than traditional traction (intermittent or sustained). Rather than allowing forces to be dispersed throughout the lumbar tissues, these treatments attempt to concentrate them in a smaller area. AT, for example, allows the patient to concentrate the force by finding the position that most relieves their pain and applying distraction in that position. Distraction-manipulation, most often used by chiropractors and physical therapists, is performed on treatment tables that allow the operator to determine the moment-to-moment vector and timing of the distractive force. These techniques include FD (Cox technique), Leander technique, and Saunders Active Trac method, among others.

Summary evidence in recent systematic reviews and clinical practice guidelines concludes that mechanical lumbar traction is not effective for treating acute or chronic nonspecific low back pain (LBP); however, many physical therapists continue to use it, primarily as an additional modality. Indeed, expert clinical opinion, theoretical models, and some research evidence suggest that certain patients with LBP respond positively to traction. A study published by Thackeray et al. (2016) concluded that there is no evidence that mechanical lumbar traction in combination with an extension-oriented treatment is superior to extension-oriented exercises alone in the management of patients with lumbar nerve root compression.

Herniated lumbar discs are the central cause of sciatica. Cohort studies suggest that the condition of many patients with a herniated lumbar disk improves in 6 weeks. In other words a conservative therapy is generally recommended for 6 weeks in the absence of a major neurologic deficit. There is no proof that conservative treatments change the natural history but some offer slight relief of symptoms. A meta-analysis of 32 randomised trials showed no significant benefit of lumbar traction. Several studies have investigated the effect of lumbar traction on lumbar disc herniation. Autotraction does not change the location and size of an herniation but there is a marked clinical improvement in the patients.
According to Ljunggren et al., autotraction and manual traction are equally efficient, in both treatments the pain intensity was significantly reduced. Mechanical lumbar traction as additional therapy to extension exercises facilitates the patient’s improvement in pain and return to prior level of function. After 5 weeks patients no longer experience low back pain and improved in terms of functional status and pain-related disability. Lumbar traction in combination with a physical therapy program also gives a decrease in the size of herniated disc material. Unlike the previous studies, Rattanatharn et al. showed no benefit of traction (together with routine conservative treatment) for patients with acute herniated disc syndrome.

Either alone or in combination with other treatments, traction has little or no impact on pain intensity, functional status, global improvement and return to work among people with low back pain. There is no improvement in functional status, pain, range of motion and work absence due to lumbar traction (compared with sham traction). Also the addition of intermittent mechanical traction to a standard graded activity program gives no extra advantage for people with low back pain. There is no difference in outcome of the graded activity program with or without the lumbar traction. Borman et al. had the same effect in their study: no specific effect of traction in standard physical therapy for low back pain was observed.
Although previous conclusions give no benefit to lumbar traction for low back pain. searched prediction rules for those patients who have an improvement. The presence of non-involvement of manual work, low level fear-avoidance beliefs, no neurological deficit and age above 30 years increase the probability of response to mechanical lumbar traction.

How much Percent of body weight must be used?

In deciding what traction weight to apply, one must consider 2 aspects:

The McGill Pain Questionnaire (MPQ) is a self-reporting measure of pain used for patients with a number of diagnosis. It is composed of 78 words, of which respondents choose those that best describe their experience of pain.
The Roland-Morris Disability Questionnaire (RMDQ) is designed to assess self-rated physical disability caused by low back pain.
Oswestry Low Back Pain Disability Questionnaire is to assess pain-related disability in persons with low back pain (LBP). It consists of 10 questionnaires about how pain affects daily activities, scored from 0 to 5 for each section, with higher values indicating more severe impact; and a 12-item short-form health survey (SF-12) that consists of 12 questions concerning general health and can be divided into two aggregate summary measures: the physical component summary (PCS) and the mental component summary (MCS).
VAS-pain: intensity of pain. which is a horizontal scale graded from zero, representing no pain, to 100mm, re- presenting the worst imaginable pain.VAS-Lu: intensity of pain for lumbar pain. VAS-Le: intensity of pain for leg pain.
Numerical pain rating scale (NPRS): on a box scale from 0–10 describing ‘usual level of pain in the last week’.
Numerical rating scale of limitation of activities (NLARS) on a box scale from 0–10 describing ‘ability to perform usual activities in the last week’