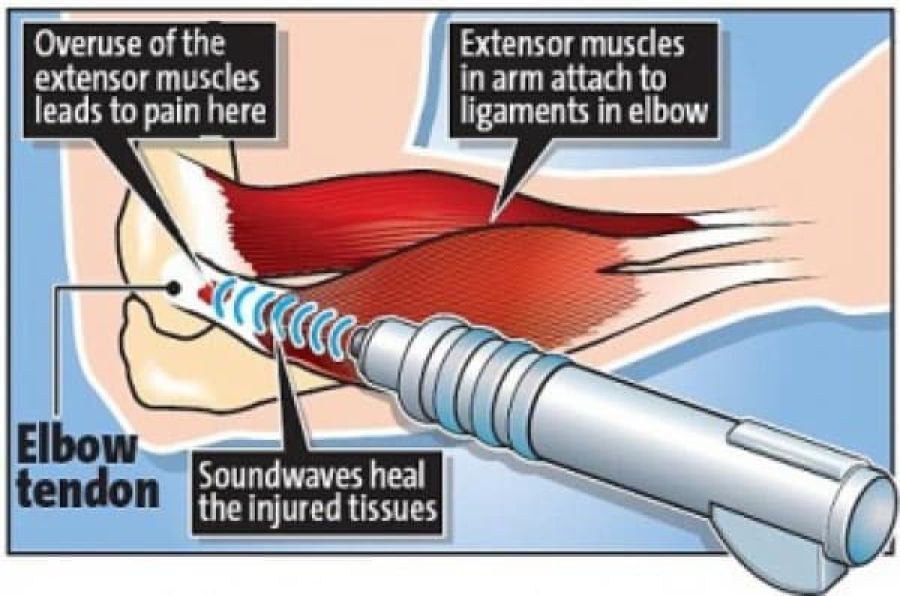 It should be remembered that only 5% of people suffering from tennis elbow relate the injury to tennis! Contractile overloads that chronically stress the tendon near the attachment on the humerus are the primary cause of epicondylitis. It occurs often in repetitive upper extremity activities such as computer use, heavy lifting, forceful forearm pronation and supination, and repetitive vibration. Despite the name you will also commonly see this chronic condition in other sports such as squash, badminton, baseball, swimming and field throwing events. People with repetitive one-sides movements in their jobs such as electricians, carpenters, gardeners , desk bound jobs also commonly present with this condition.

The elbow joint is made up of three bones: the humerus (upper arm bone), the radius and ulna (two bones in the forearm). At the distal end of the humerus there are two epicondyles, one lateral (on the outside) and one medial (on the inside).
The area of maximal tenderness is usually an area just distal to the origin of the extensor muscles of the forearm at the lateral epicondyle. Most commonly, the extensor carpi radialis brevis (ECRB) is involved, but others may include the extensor digitorum, extensor carpi radialis longus (ECRL), and extensor carpi ulnaris.
The radial nerve is also in close proximity to this region, and divides into the superficial radial nerve and the posterior interosseous nerve.

Lateral epicondylitis is classified as an overuse injury that may result in hyaline degeneration of the origin of the extensor tendon. Overuse of the muscles and tendons of the forearm and elbow together with repetitive contractions or manual tasks can put too much strain on the elbow tendons. These contractions or manual tasks require manipulation of the hand that causes maladaptions in tendon structure that lead to pain over the lateral epicondyle. Mostly, the pain is located anterior and distal from the lateral epicondyle.
Epicondylitis occurs at least five times more often and predominantly occurs on the lateral rather than on the medial aspect of the joint, with a 4:1 to 7:1 ratio. It affects 1-3% of the population, with those 35-50 years old most commonly being affected. If a patient is <35 , it is important to consider differential diagnosis (growth plate disorder, referral from the cervical spine. If a patient is >50, consider OA, referred cervical spine pain. In a study by Nirschl, 1973, of 200 tennis players aged >30, 50% had symptoms of tennis elbow at some stage.
This injury is often work-related, any activity involving wrist extension, pronation or supination during manual labour, housework and hobbies are considered as important causal factors. Lateral epicondylitis is equally common in both sexes. Between the ages of 30-50 years the disease is most prevalent. Obtaining of the condition at the both lateral epicondyle is rare, the dominant arm has the greatest chance of the occurrence of lateral epicondylitis. Twenty percent of cases persist for more than a year.
A systematic review identified 3 risk factors: handling tools heavier than 1 kg, handling loads heavier than 20 kg at least 10 times per day, and repetitive movements for more than 2 hours per day. Other risk factors are overuse, repetitive movements, training errors, misalignments, flexibility problems, ageing, poor circulation, strength deficits or muscle imbalance and psychological factors.
There are several opinions concerning the cause of lateral epicondylitis:

A thorough assessment and examination are key elements in ensuring that the correct treatment plan is implemented, enhancing the recovery process. The assessment should also include elements to exclude a differential diagnosis.

The diagnose starts with asking about the activity level , occupation risk factors, recreational sports participation, medication and other medical problems. During the physical exam, the medicine will feel the structure of the elbow and other joints. Also the nerves, muscles, bones and skin are examined. It’s important to know which activities cause symptoms and where on your arm the symptoms occur.

Investigations are usually not performed in the straightforward case of lateral elbow pain. However, in longstanding cases, plain X-ray (AP and lateral views) of the elbow may show osteochondritis dissecans, degenerative joint changes or evidence of heterotopic calcification.
Ultrasound examination may prove to be a useful diagnostic tool in the investigation of patients with lateral elbow pain. Ultrasound may demonstrate the degree of tendon damage as well as the presence of a bursa.

There are different types of therapies to treat lateral epicondylitis, all with the same aim: reduce pain and improve function. General physiotherapy management includes: