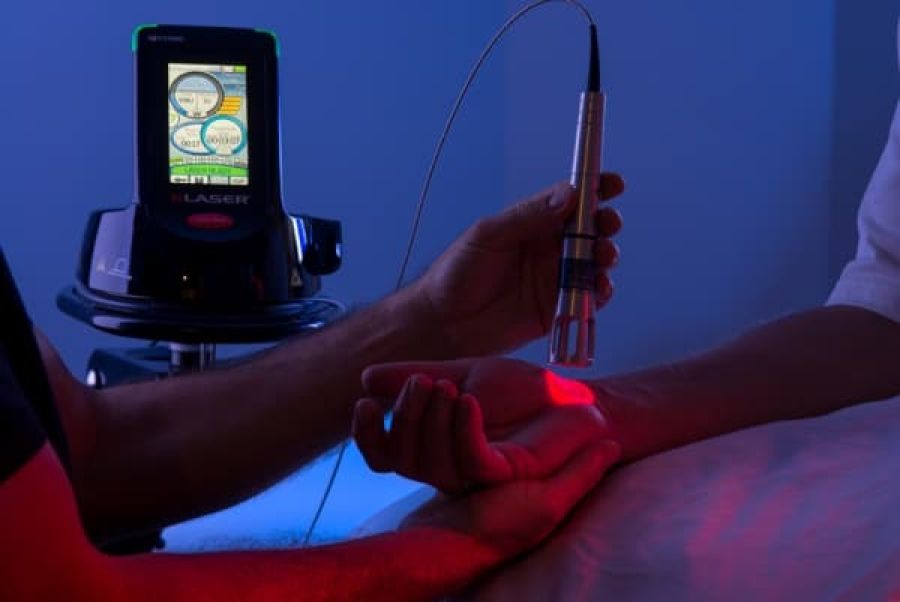 An output power of less than 0.5 Watts is classed as Low Level Laser Therapy LLLT ( class III in the USA) whereas lasers with an output powers greater than 500 mW or
0.5 Watts are termed High Power Laser Therapy HPLT (Class IV lasers in the USA). HPLT creates heat on the surface of the skin due to their higher power
density (irradiance). LLLT is often referred to as “Cold Lasers” since they do not create a heating sensation during treatment.

Laser device is made up of an optical cavity or chamber that contains active medium for which laser is named.The chamber has mirrors on either end that are perfectly parallel to each other within a single wavelength of light.One of the mirror is partially open. Electricity or energy is added to the medium which excites it.The active mediums atoms are reflected back and forth across the mirrors within the chambers.this causes more excitation of atoms within the medium. Laser light is then emitted through the partially reflective end of mirror.The light production occurs in the following steps:

Due to specific nature of how laser is produced it also has specific properties;

How does Laser Work

When the light source is placed against the skin, the photons penetrates several centimetres and gets absorbed by the mitochondria. The energy fuels many positive physiological responses resulting in restoration of normal cell morphology and function but at enhanced rate.Targeted in haemoglobin and cytochrome oxidase, the high power diode laser could help in respiration and then in result have a good performance therapy.

Physiotherapists use HPLT basically on the presumption that energised cells from the laser increase the rate of healing.
Class IV hot laser therapy (high intensity laser therapy) can treat a variety of conditions, such as:

The results of 2018 study entitled "Effectiveness of high-intensity laser therapy in the treatment of musculoskeletal disorders. A systematic review and meta-analysis of randomized controlled trials" concluded that HILT treatment for back and neck pain significantly improved pain and disability scores compared with controls. It also commented that additional well-designed studies involving larger samples with long-term follow-up were needed to further assess each laser application, treatment region, and comparator.
A 2017 review titled "Effective treatment options for musculoskeletal pain in primary care: A systematic overview of current evidence" concluded that the evidence on effectiveness of laser therapy for shoulder pain or acute or chronic neck pain was inconclusive. With regards to knee pain low level laser therapy may confer added benefits to exercise and / or surgical treatment.