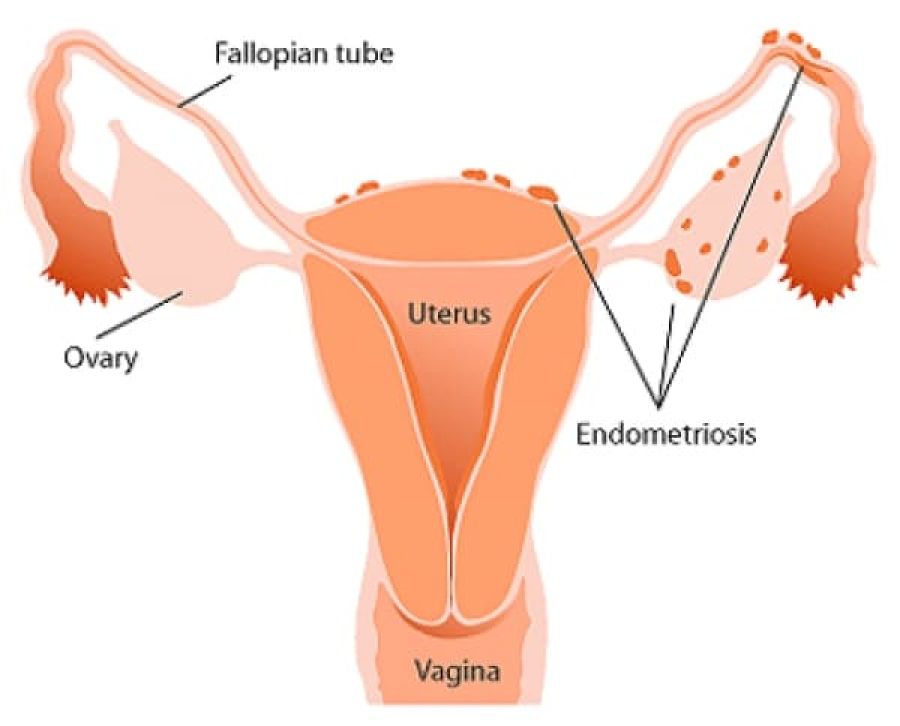 In a typical monthly menstrual cycle, endometrial cells lining the uterine walls are stimulated through a release of hormones and multiply in order to provide an ideal environment for egg fertiliztion. If fertilization of the egg does not occur, the uterus sloughs off the lining of blood (endometrial tissue) and menstrual flow occurs for 3 to 5 days.
When affected by endometriosis, endometrial tissue is misplaced outside the uterus in various places. Despite the location of the tissue, the same monthly menstrual cycle occurs. The misplaced tissue engorges with blood, as it would in the uterine lining. Since this blood has no course to drain out of the vagina it remains where it is resulting in "chocolate cysts" wherever endometrial cells are located. In addition to cysts, trapped blood may lead to scar tissue, adhesions and irritation of the surrounding tissue which causes pelvic pain and fertility problems.
Blood deposits or ectopic implantation may occur anywhere in the body but most commonly affects the ovaries, fallopian tubes, broad ligaments, bladder, pelvic musculature, perineum, vulva, vagina, or intestines. It has been discovered that endometrial tissue has the ability to migrate through the body, and, in less common cases, has been found in the abdominal cavity, kidneys, small bowel, appendix, diaphragm, pleura, bone and even the brain.

The incidence of Endometriosis has been on the rise in Western countries for the last 40 to 50 years. Although there are statistics in the literature, the true prevalence of endometriosis is unknown because many women remain asymptomatic. It has been reported that endometriosis occurs in a wide range of 7%- 60% of all women. Further Reports in 2008 revealed that endometriosis occurs in 7%-10% of women in the general population, 2%-50% of women suffering from infertility, and 71%-87% of women with chronic menstrual pain. Unlike many common disorders, there have been no correlations between endometriosis and specific populations. Endometriosis has been shown to affect women of all race, cultures, ethnic origins, socioeconomic status, and geographic backgrounds.

Generally, endometriosis becomes apparent soon after menses begins in early teen years, and symptoms continue until menopause. Although any woman of child-bearing age is at risk of developing Endometriosis, it is more common in those who have postponed pregnancy.
Endometriosis has been shown to vary in its degree of severity. In order to gauge the level of severity, the American Society of Reproductive Medicine has developed five stages of classification: I (minimal), II (mild), III (moderate), IV (severe), V (extensive). Despite these classifications, symptoms do not always correlate with disease severity. Many women with severe endometriosis have little pain or remain asymptomatic, while some with minimal or mild classification may experience intense symptoms affecting quality of life. It is likely that if gone untreated, symptoms will progress and worsen over time.

The following are common tests used to identify physical clues leading to the diagnosis of endometriosis:

Endometriosis is a non-curable disease. The objectives of medical treatment focus on restoring normal pelvic anatomy, removal of endometriotic implants, and prevention of reoccurrence to decrease pain and increase fertility. In order to achieve these goals, the course of medical management depends heavily on the severity of symptoms, severity of disease, age and future child bearing plans. Generally, conservative treatment is recommended to control symptoms prior to surgical management.

The main aspect of medical management is aimed at reducing or blocking ovarian function due to the fact that endometriosis is related to hormone function. Common medical treatments and their functions are listed in the medication section. In the instance that symptoms are severe and disabling, or conservative medical treatment fails, surgical procedures can be useful in removing/destroying implants and decreasing or ceasing symptoms. It is important to note that implant regrowth may occur following removal and may only be a temporary source of symptom relief.

Physical therapy may prove to be an integral treatment option for the patient with endometriosis presenting with musculoskeletal impairments. By addressing this disease using a multidisciplinary approach, decreased pain and increased functional capabilities may be provided, allowing for a greater quality of life.

A study entitled Treating Fallopian Tube Occlusion with a Manual Pelvic Physical Therapy was performed in 2008 by Wurn, BF. et al. This study described the efficacy of a non-invasive soft tissue physical therapy treatment in opening bilateral occluded fallopian tubes in infertile women with a history of abdominal-pelvic adhesions. Through this study it was discovered that non-invasive therapy such as manual techniques may be useful as an adjunct therapy in treating tubal occlusion caused by adhesions.

The ability to differentiate between symptoms associated with pelvic disease remains an integral part of physical therapy examination and evaluation. It is important for physical therapists to complete a thorough examination to include standard screening procedures as well as auscultation for bowel and bruit sounds, palpation for masses, and percussion to assess the integrity of underlying abdominal structures. A number of primary musculoskeletal impairments can manifest as pelvic pain. Receiving a diagnosis of endometriosis may be a long process involving several different health care providers. Studies show that women typically see approximately nine different health care providers before receiving a definitive diagnosis of endometriosis. Below is a list of potential differential diagnoses to consider when evaluating a patient with abdominal, pelvic or low back pain.