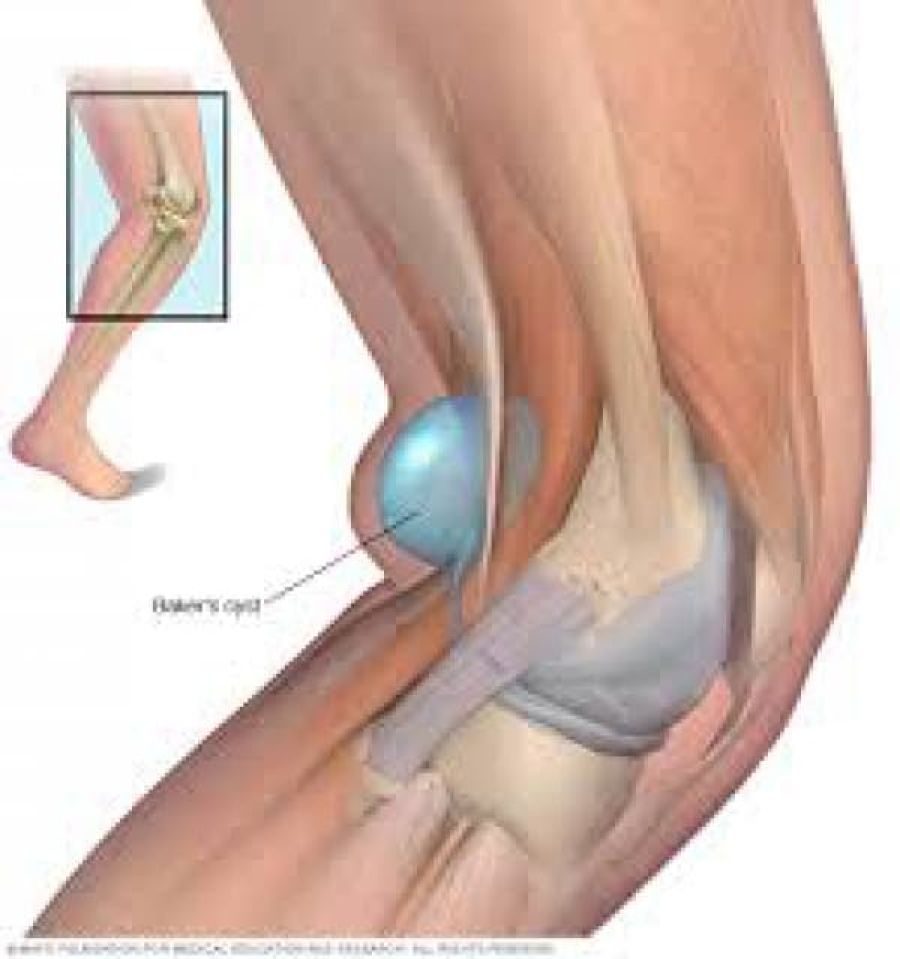 A Baker’s cyst, or a popliteal cyst, occurs if there is an underlying intraarticular problem with the knee or and inflammatory reactions, commonly as a result of losing bodies formed in conditions such as osteoarthritis, rheumatoid arthritis, ACL tears, meniscal tears or because of particles following knee arthroplasty, mostly from the polyethylene liner.

The cyst can vary in size, from a very small (asymptomatic) to a large one but a change in size is very common. Especially in smaller cysts a septum may exist separating the semimembranosus and gastrocnemius components. This may function as a flap valve allowing fluid to enter a popliteal cyst and not to exit it.

There are differences between a popliteal cyst in children and in adults. In children, there are cystic masses filled with gelatinous material that develop in the popliteal fossa, are usually asymptomatic, and are not related to intra-articular pathology. Spontaneous resolution usually occurs, although the process can take several years. In adults, a Baker’s cyst is often found in combination with other intra-articular pathologies and inflammatory conditions.

Most cysts are found on the medial side of the popliteal space in the gastrocnemius-semimembranosus bursa, but they could be found in the popliteal bursa so the mass will be found on the lateral side of the popliteal space. Also, there are some rare cases in which popliteal cyst extend superiorly or anteriorly
Cysts may range in size from small, from clinically, asymptomatic and not palpable, to large masses causing visible swelling of the patient’s knee. The size of the cyst or pain can cause limitations in range of motion. If the cyst is large, it may result in mechanical problems in knee flexion and limiting mobility.In rare cases there will be signs and symptoms of a meniscal tear which can be tested by McMurray test
Popliteal cysts can give pressure against other anatomic structures. Compression of the popliteal artery or vein can cause ischemia or thrombosis, respectively, whereas compression of the tibial or peroneal nerve can cause peripheral neuropathy.
A ruptured cyst can manifest as calf pain or even swelling, it can also cause an itching feeling in the calf. There are more common in patients with an inflammatory pathology than in patients with a degenerative pathology.

At first, direct arthrography was used for detecting popliteal cysts. Direct arthrography involved intra-articular injection of the knee with gas or an iodinated contrast medium, followed by mobilization of the joint to force the contrast into the cyst. Afterwards, spot radiographs or fluoroscopy were used to detect the presence of the contrast in the cysts. The disadventages of this technique include the use of ionizing radiation and the use of invasive techniques to inject the contrast.

The advantages of ultrasound provide a replacement of arthrography by ultrasound. The advantages are its low cost, noninvasive usage and the absence of radiation. The main disadvantage is the fact that it is user dependent. Ultrasound is able to detect Baker’s cysts near 100% but lacks to differentiate from other conditions, such as meniscal cysts or myxoid tumors, it also doesn’t visualize other conditions in the knee that are often associated with these cysts.

The gold standard for diagnosis of Baker’s cysts and differentiating them from other conditions remains magnetic resonance imaging. It allows to assess soft tissue abnormalities and has the added advantage of being accurate at diagnosing associated joint disorders[9] so the entire spectrum of related disorders is possible to assess
Conditions such as meniscal cysts are more easily differentiated from Baker’s cysts with MRI than ultrasound. This may be the gold standard but is also a high-cost technique, therefore, ultrasound should be considered as a screening modality if the evaluation of the intra-articular structures is not necessary.

Outcome measures are used to determine and evaluate the expected results of the therapy/procedure to be compared to the results found within the patient.

Sometimes no treatment or simple supportive measures lead to spontaneous resolution or to a reduction of the symptoms. If this does not happen, invasive and surgical techniques may be an option.
The asymptomatic popliteal cyst often gets better and disappears by itself over time. If symptomatic, rest can temper the pain that bursa is causing, take non-steroidal anti-inflammatory drugs (NSAID) to alleviate the pain and restrict movement, also alternate with ice.
If the pain persists, a subsequent steroid injection with a solution of anesthetic and steroid can be advised which can relieve pain, but not prevent recurrence of the cyst. It’s only a temporary solution.By a popliteal cyst of inflammatory origin, it is enough to treat the underlying disease. When the underlying disease doesn’t get treated, the Baker’s cyst can come back. Arthroscopic examination should be performed and all pathologic conditions treated before considering the excision of a popliteal cyst.
The cyst can be removed with surgery if it becomes very large or causes symptoms such as discomfort, stiffness or painful swelling. There are three surgical techniques available to treat the cyst: common posterior approach, the posteromedial approach, and the medial intra-articular approach. The first two techniques are techniques where the cyst is going to be removed. In the last technique, they make an opening in the cyst and close it afterward. The popliteal cyst will eventually disappear.

An ice massage of 15 minutes every 4-7 hours will reduce the inflammation. The treatment is based on the principles of R.I.C.E (rest, ice, compression, and elevation) followed by some muscle-conditioning exercises.
A rehabilitation program can improve the control of the knee joint by range of motion exercises. It will increase the motion of the joint as well as increase flexibility. The physiotherapist will give a mobility, a hamstring stretching program and a concurrent quadriceps strengthening program that has to repeat several times a day. This will result in less pain at about 6-8 weeks.
There is an experiment comparing ultrasound guided corticosteroid injections with a horizontal therapy. 60 people were divided in three groups, only injections (group A), only horizontal therapy (group B) and (group C) they got both the injections and the horizontal therapy. The horizontal therapy was delivered through a specific commercial device, and they followed the instructions, provided by the manufacturer. Patients in groups A and C had a lower level of pain after one month. Group C had the lowest VAS scores and group C also scored best on the WOMAC. In group B and C the stiffness and disability scores were also improved the most.